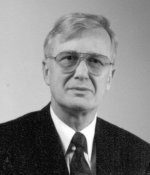 For major contributions to advancing the technology and field application of horizontal well systems, subsea production systems and high-pressure gas compression facilities; and for his commitment to advancing the global mission of the Society.

Jacques Bosio retired at the end of 1994 as deputy R&D director at Elf Aquitaine Production in Paris where he worked since 1979. He earned an MS degree in mechanical engineering from Ecole Centrale in Paris in 1957 and studied reservoir engineering at the University of Texas during 1957-58 on a Rotary International graduate fellowship. Active as a consultant since he retired from Elf, he is currently engaged in the conversion of the naval construction activity of the city of Brest, at the western tip of Brittany, France into an R&D and industrial activity for the deep offshore industry. Mr. Bosio was deeply involved until June 2000 as a member of the Technical Scientific Committee of the World Petroleum Congress. An SPE member since 1984, Mr. Bosio has been a leader in section, regional, and Society-wide activities. He was co-founder of the France Section of SPE in 1984 and served a 2-year term as section chairman. Later on elected to the Board of Directors, he joined the Executive Committee in 1991 and became President of the Society in 1993. He is presently a Member of the Foundation Trustees of the SPE.