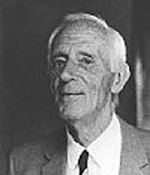 A mining engineer and geologist who combined art and imagination in his interpretations of geologic relations and their economic significance. Our country and the world have benefited from his wisdom and skill.
Deceased: 1975

His discerning report in 1912 on the prospects for copper ore in the United Verde Extension ground at Jerome, Arizona, gave timely encouragement and guidance to the exploration which led to the discovery of rich copper ore bodies that made this enterprise outstanding in mining history.

Since 1923 the consulting work of Mr. Joralemon has taken him to every continent except Antarctica. He has served as a lecturer in mining geology at the Universities of California, Stanford, Harvard and Wisconsin.

From 1917-19 he was in the United States Air Service and was made a Chevalier of the French Legion d'Honneur in 1918. In World War II he served with both the War Production Board and with Metals Reserve Company and later was for some time chairman of the Advisory Committee on Raw Materials, Atomic Energy Commission.