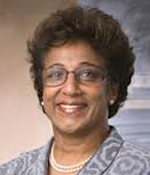 For her leadership in the development of mathematical models that describe the relationship between operational parameters and quality in the continuous casting of steel, and for her passion to expand the understanding of steel solidification and transfer this knowledge by educating the operators of industrial steel casting machines.

At the University of Alberta, building strong international partnerships is a signature feature of her leadership. Recent institutional level agreements, notably with the Helmholtz Association of German Research Centres, the Li Ka Shing Foundation, the Indian Institutes of Technology (IIT) Bombay, Delhi and Roorkee, illustrate the University of Alberta’s commitment to being a global institution working with the international community to find solutions to shared challenges. Under her administration, a renewed vision Dare to Discover, was established and close to $1.5 billion in capital construction was completed including the National Institute for Nanotechnology, the Centennial Centre for Interdisciplinary Science and the Edmonton Clinic in partnership with Alberta Health Services. During her tenure, the University opened a downtown campus, Enterprise Square, established the Killam Research Fund for the Social Sciences, Humanities, and Fine Arts, and created the School for Public Health. During her Presidency the University celebrated its centenary in 2008 with the Prime Minister’s conversation series and successfully concluded a $600M fund-raising campaign.

Serving the wider community in several ways, Dr. Samarasekera sits on several local and national boards. She has Chaired the National Institute of Nanotechnology (NINT), sits on the Board of Directors of the Bank of Nova Scotia (Scotiabank), and is a member of Canada’s Science, Technology, Innovation Council. She has served on the Public Policy Forum of Canada, a Presidential Visiting Committee at MIT , the Conference Board of Canada, and the Prime-Minister’s Panel for the Renewal of the Public Service. She was an advisor to the Canadian Minister of Environment at the 2009 Copenhagen Summit, served as a moderator and speaker at the 2010 and 2011 at World Economic Forum in Davos, and the “Summer” Davos in China. She participated in the Prime Minister's roundtable on Canada-India higher education cooperation. She also participated in the 2008 and 2009 G?8 summits of university presidents in Hokkaido and Turin respectively. A sought-after speaker, she has addressed the National Science Foundation in the US, the Science and Technology Forum in Japan and to the Canada?UK Chamber of Commerce in London.

Dr. Samarasekera received the E.W. R. Steacie Memorial fellowship in 1991, awarded by NSERC to the top 4 researchers under 40 in science and engineering in Canada. She was awarded the Order of Canada in 2002 in recognition of outstanding contributions to steel process engineering. Dr. Samarasekera is a Fellow of the Royal Society of Canada, a Fellow of the Canadian Academy of Engineering and a Fellow of the Canadian Institute of Mining, Metallurgy and Petroleum (CIMM). She has received honorary degrees from the University of British Columbia and the University of Waterloo in Canada and Queen’s University in Belfast, Ireland.