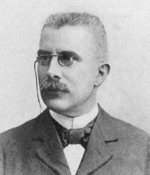 Henri-Louis Le Châtelier was born into a family of architects, engineers, and scientists in Paris. His family home was like a drop-in center for France's leading chemists. Le Châtelier became a well-known industrial chemist himself, interested in metallurgy, cements, glasses, fuels, explosives, and, most famously, chemical equilibrium. By mixing theoretical work with practical applications, Le Châtelier became one of France's most valuable and productive chemists.

Le Châtelier served as an army lieutenant during the Franco–Prussian War in 1870, after which he returned to school to finish his degree. His intention was to become a mining engineer, but he changed his mind when he was offered a professorship in chemistry at the École des Mines in Paris.

Le Châtelier's first area of investigation was the chemistry of cements. By repeating the experiments of Antoine Lavoisier on the preparation of plaster of paris, Le Châtelier learned that when a cement comes into contact with water, a solution is formed that yields an interlaced, coherent mass of minute crystals.

Through his studies on cements, Le Châtelier became interested in the applications of thermodynamics to chemistry. It was while working with thermodynamics that Le Châtelier devised what became known as Le Châtelier's principle in 1884. This principle states that if a system is in a state of equilibrium and one of the conditions is changed, such as the pressure or temperature, the equilibrium will shift in such a way as to try to restore the original equilibrium condition. Using Le Châtelier's principle as a guide the efficiency of chemical processes can be improved by shifting a system to yield more of the desired product. For example, the German chemist Fritz Haber employed the principle in his development of a process for synthesizing ammonia. Le Châtelier considered missing this practical application of his principle to be the greatest blunder in his scientific career.

In addition to his work on equilibrium, Le Châtelier was involved in many other areas of chemistry and science in general. For instance, he investigated the cause and prevention of mining disasters. He helped produce safer explosives and conducted research that was used to develop the torch now used in cutting and welding steel. He also designed instruments when none existed to suit his purposes, such as the thermocouple to measure very high temperatures.

Le Châtelier was additionally involved in other areas of research. He wrote numerous biographies and spent much time working on articles on social welfare, the relationship of science to economics, and the relationship between pure and applied science. Le Châtelier was also devoted to teaching, working at the École des Mines until he retired at the age of sixty-nine. He advised his students to be content with adding to the structure of science, but to pay attention to anything unusual they observed.

Le Châtelier contributed much to chemistry. He bridged the gaps between theory and practice by choosing research problems that looked as if they would have industrial applications. For this reason, he became one of the most successful researchers in combining theoretical science with practical applications.