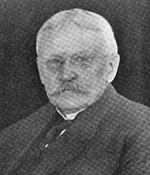 Professor Heinrich O. Hofman was born in Heidelberg, Germany, in 1852. His father was a college professor, Karl Hofman by name; his mother was English. Professor Hofman was educated at Heidelberg University in general science, working under Kirchhoff and Bunsen and afterwards studying at Clausthal Mining Academy, where he received the degrees of Mining Engineer and Metallurgical Engineer in 1877. For several years thereafter he acted as research chemist at Lautenthal Lead Silver Works, afterwards going to Cologne to make plans for a parting plant.

Professor Hofman came to the United States in 1881 and went to work at Mine LaMotte, Missouri, as metallurgist. He was later successively metallurgist at the Argentine works of the Consolidated Kansas City Smelting & Refining Co.; and Carment Mining Co., Villaldama, N.L., Mexico.

In Boston in 1885, with the intention of doing consulting work, he was requested by Professor Richards of M.I.T. to deliver a course of lectures on lead smelting to the students.

This course formed the basis of the first edition of “Metallurgy of Lead.” Professor Richards was taken ill and Professor Hofman took up his work, lecturing both on mining and metallurgy. Professor Richards was ill for some months and when he returned to his duties, Professor Hofman became his private assistant, until, in 1887, he was called to the chair of metallurgy and assaying at the South Dakota School of Mines. This he filled until 1889, when he was offered the assistant professorship of mining and metallurgy at M.I.T. In this year, also, he obtained the degree of Ph. D. for Ohio University.

Later, he became associate professor of mining and metallurgy at M.I.T., and finally professor of metallurgy. When Professor Richards was made emeritus, in 1915, Professor Hofman was appointed acting head of the Department of Mining and Metallurgy, and it was during this period that the mining laboratory in the new building was planned and installed, and many of the ideas embodied in the plan were original with him.

Professor Hofman has endeared himself to hundreds of students in mining and metallurgy at Tech, by his sympathy and genial good humor. His lucidity and profound knowledge have made his lectures a joy, as they have made his published works the inseparable companions of all metallurgists.

Professor Hofman is best known to the world at large for his publications, and in this respect he is to this generation what Schnabel was to the previous one.