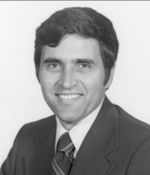 For total dedication to the service of mankind, in the preparation of his mind and body, so that his short stay on the Moon could provide the maximum contribution to earth sciences.

Harrison H. Schmitt is a NASA Astronaut and geologist, and was the Lunar Module Pilot for the recent APOLLO 17 lunar mission. Dr. Schmitt was born in Santa Rita, New Mexico, and received his Bachelor of Science degree from the California Institute of Technology in 1957. During 1957-1958 he studied at the University of Oslo, Norway by means of a Fulbright Fellowship and received his Ph.D. degree in geology from Harvard University in 1964. While in Norway, Dr. Schmitt did work for the Norwegian Geological Survey, then worked for the U.S. Geological Survey in New Mexico and Montana.

Before coming to the Manned Spacecraft Center in Houston, Dr. Schmitt served with the U.S. Geological Survey's Astrogeology Center at Flagstaff, Arizona, where he was project chief for lunar field geological methods. He was selected as a Scientist-Astronaut by NASA in June of 1965, and has been instrumental in providing APOLLO flight crews with detailed instruction in lunar navigation, geology and feature appreciation. He has also participated in research activities requiring geologic, petrographic and stratigraphic analyses of samples returned from the Moon by APOLLO missions.

Dr. Schmitt made his first flight into space as Lunar Module Pilot of the APOLLO 17 manned lunar mission, accompanying Astronauts Eugene Cernan and Ronald Evans from December 6 to December 19, 1972. After landing their Lunar Module "Challenger" at Taurus-Littrow at the southeast edge of Mare Serenatatis, Astronauts Schmitt and Cernan completed three highly successful excursions to nearby lunar craters and the Taurus Mountains. While on the Moon, Dr. Schmitt logged over 22 hours of extravehicular activity.