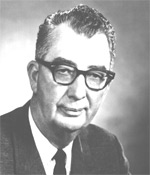 For more than forty years of dedicated service to the Institute, for inspirational motivation of young engineers, and for achievements in furthering conservation of the nation's crude oil reserves.
Deceased: 1993

H. Mark Krause, Jr., was graduated from Louisiana State University in 1936 with a B. S. degree in petroleum engineering. He began his 41 year career with Humble Oil and Refining Co;, and its successor Exxon U.S.A., as a Rotary Rig Floor Man. He progressed to Senior Engineer in the Houston Headquarters in 1945, Assistant Division Engineer in New Orleans in 1948, and Chief Engineer of Humble's Gulf Coast Division in Houston in 1951. He later rose to Area Engineering Coordinator, Area Operations Superintendent, and, in 1965, to Division Joint Interest Manager, the position he held until I his retirement in 1977. From 1977 to 1982 Mr. Krause served as a Consultant for Westland Oil Development Corporation and in 1979 assumed the additional responsibility for production operations for Westland. Mr. Krause most recently served on a consulting program with independent operators in the Central Louisiana Wilcox producing area.