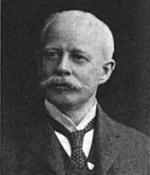 In recognition of his eminence in all matters relating to the safe-working of coal-mines and the well-being of mine-workers, with special reference to the practical application of scientific knowledge.
Deceased: 1950

George S. Rice, chief engineer New York Rapid Transit Commission was born on February 28, 1849, at Boston, Mass. He was educated at Harvard University, class of 1870, graduating with the degree of S.B.A. Mr. Rice has had a long and varied engineering experience. The year before his graduation he was employed in the engineering department of the Boston water works and assisted in the construction of the Chestnut Hill reservoir. Upon leaving the university he became assistant engineer of water works at Lowell, Mass., and in 1871 division engineer of the Boston water works. This position he held until 1877. He was then made principal assistant engineer in charge of the Boston main drainage works, which position he held for three years. In 1880 he engaged in mining work in Arizona and Colorado and after seven years' experience in mining engineering went to New York City as deputy chief engineer of the Aqueduct Commission which had charge of the New Groton aqueduct. He worked vigorously for four years in revising the methods of construction which had been adopted for this work, and in 1891 resigned to become chief engineer of the Rapid Transit Commission of Boston. From 1892 to 1900 he engaged in engineering in private practice, serving from 1893 to 1900 as instructor of water supply and sanitary engineering at Harvard University. In 1900 He was appointed deputy chief engineer of the Rapid Transit Commission of New York, and in 1905, at the resignation of William Barclay Parsons, was made chief engineer of that commission. Mr. Rick is a member of the American Society of Civil Engineers, the Boston Society of Civil Engineers, the New England Water Works Association and the American Institute of Mining Engineers and of various clubs in New York City and Boston.