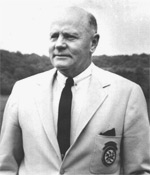 For his outstanding accomplishments and innovations in the field of Safety, Operations, Marketing, Research, and Employee Relations for the Coal Industry, and for his leadership in all industry, particularly the Mining Industry.
Deceased: 1991

George Hutchinson Love is Chairman of the Board of the Consolidation Coal Company in Pittsburgh.

Mr. Love was born in Johnstown Pennsylvania and was graduated from Princeton University with a Bachelor of Arts degree in 1922. He continued his education at the Harvard School of Business, earning his M.B.A. degree in 1924. After working for two years with Lee-Higginson, a Chicago-based investment banking firm, he became Assistant to the President of Union Collieries Company in Pittsburgh, as well as Assistant to the President of Bessemer Coal and Coke Corporation, the holding corporation of Union Collieries. In 1943 he became Executive Vice President and Chairman of the Executive Committee for Consolidation Coal Company in New York, and became its Chairman of the board in 1956. Under his leadership, Consolidation was the first coal company to utilize market research to find new uses and markets for coal. He also stressed mechanization in coal mines, and joined with Hohn L. Lewis to form the National Coal Policy Conference. He also served as Director of the American Mining Congress and the National Coal Association, and was instrumental in forming the Bituminous Coal Operator's Association. In addition to serving as Chairman for Consolidation Coal, Mr. Love was Chairman of the M.A. Hanna Corporation and Vice Chairman of National Steel Corporation from 1952 until 1961. He became Director of Chrysler in 1958 and served as its Chairman from 1961 until 1966.

Mr. Love was awarded the AIME Erskine Ramsay Medal in 1962. He holds honorary Doctor of Laws degrees from five universities, has received honors from a number of professional and service societies, and has participated in Federal government committees.