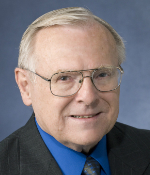 For his long and outstanding academic career, for his widely recognized research contributions in conformance control using gelled polymers, as author of textbooks on waterflooding and EOR, for leadership in technology transfer to Independent Oil Operators as Co-Director of the Tertiary Oil Recovery Project, and for exceptional service for SPE and the petroleum engineering profession.

G. Paul Willhite is the Ross H. Forney Distinguished Professor of Chemical and Petroleum Engineering at the University of Kansas where he has taught petroleum and chemical engineering courses since joining the faculty in 1969. His research program includes studies on waterflooding, surfactant and polymer flooding, water control using gelled polymer systems and carbon dioxide miscible flooding. He is the Co founder of the Tertiary Oil Recovery Project at KU and served as Co Director from 1974-2009. Prior to joining the University of Kansas, he conducted research in the Production Research Division of Continental Oil Company from 1962-1969. He is the author of the SPE Textbook:”Waterflooding” published in 1986 and coauthor of the SPE Textbook:” Enhanced Oil Recovery” published in 1998. He co edited the SPE Speed Up Series on Surfactant Flooding (2011) and Polymer Flooding (2011) and serves as an Associate Editor, SPEJ. Other professional activities include service as an ABET Evaluator for both chemical and petroleum engineering programs. He has a B.S. in Chemical Engineering, Iowa State University (1959) and a PhD in Chemical Engineering from Northwestern University (1962).