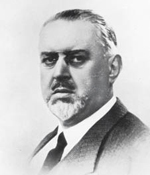 Federico Giolitti, son of the statist Giovanni Giolitti, was born in Corio Canavese (Turin) on 11th July 1880. He graduated in Chemistry at the University of Rome in 1902.

In 1905 Giolitti got the qualification for university teaching in General Chemistry at the University of Rome, where two years later he taught Metallurgy.

From 1909 to 1914 Giolitti was full professor of Metallurgy and Metallography at the Politecnico di Torino.

He is one of the founders of Steelworks of Aosta, a company now named Società Nazionale Cogne. Giolitti wrote over eighty scientific works, among which the most important refer to the steel cement-making (1912) and nitruration treatments (1933). Giolitti died in Turin on 11th February 1946.

Outstanding achievements in materials science and technology are recognized by The Associazione Italiana di Metallurgia (AIM) through the awarding of medals and prizes. These awards include The Federico Giolitti Steel Medal, awarded to iron and steel metallurgists with an outstanding reputation--also in memory.