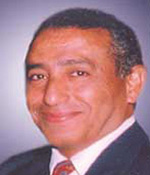 In recognition of his contributions to the petroleum engineering profession, and his career long efforts to expand understanding and collaboration among petroleum professionals worldwide.
Deceased: 2013

Dr. Farouk Kenawy , an SPE distinguished member is currently a consultant for upstream Oil & Gas industry where he assess Oil & Gas prospects and plans acquisitions. He serves as a member of the board in some companies and banks and he is an active member of the board of the Society of Egyptian Engineers With SPE, Dr. Kenawy has served the society in different capacities, he was member of the Egyptian section since 1979, Chairman of the section 1981 till 1983 and from 1989-1991, Director of the Egyptian section 1983-1984 and 1991-1993, he was also the Middle East SPE regional director 1994-1997 where he also served as a member of the SPE international board of directors. Dr. Kenawy has also served in numerous committees for the SPE in more than 15 international conferences and workshops, and was invited as keynote speaker several times. He is the recipient of the SPE Middle East Region Service Award 1991, and the SPE Distinguished Member Award in 1993 Dr. Kenawy served as a Member of the Supreme Court of Ethics, Ministry of Justice, Egypt 1994-1995, and is a current member of Lloy's Register Egyptian Committee since 1995. Dr. Kenawy is a past Chairman and CEO of Belayim Petroleum Company and the Gulf of Suez Petroleum Company where he was responsible for producing around 60% of Egyp's oil and gas production, he later served as a senior advisor for the Minister of Petroleum of Egypt. In his academic and technical capacity, Dr. Kenawy supervised more than 25 Ph.D. and M.Sc. theses for Cairo, Alexandria and Al-Azhar Universities, he has also published over 20 papers in Russian for the Russian Petroleum & Heat Transfer Magazine, and is the co-author of one book on Enhanced Oil Recovery (EOR) also published in Russian. Dr. Kenawy has also published over 50 articles in English related to Reservoir Engineering, Reservoir Management, Facilities Construction, Health, Safety, and Environment, Management, and Cultural Diversity. Dr. Kenawy holds a BSc degree in Petroleum Engineering from Cairo University 1962, and a PhD in Petroleum Engineering from the Moscow Petroleum Institute, 1970.