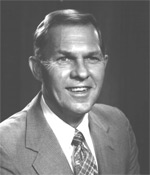 For his visionary leadership in building an innovative, fiercely competitive steel company and for pioneering the commercialization of thin slab casting which has transformed the steel industry worldwide.
Deceased: 2002

F. Kenneth Iverson is chair of Nucor Corporation. He joined Nucor in 1962 as a vice president, was elected president and chief executive officer in 1965, and chair in 1984. He received a B.S. in aeronautical engineering from Cornell University and an M.S. from Purdue University.

He has also received honorary doctorates from the University of Nebraska and Purdue University. He started his career as a research physicist and held a number of technical and administrative positions in the metals industry before joining Nucor. He is a director of Wachovia Corporation, Wal-Mart Stores, Wikoff Color Corporation, and Citizens for a Sound Economy.

He has received a number of honors and awards. He was awarded the National Medal of Technology, the nation's highest award for technological achievement, by U.S. President George Bush and was named best chief executive in the steel industry in 1993 by the Wall Street Journal.