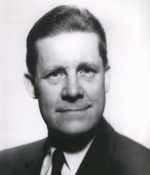 In recognition of his extraordinary dedication to the minerals industry education of young engineers; his pioneering developments in lateritic nickel operations, and as a tribute to his dedicated service to the Institute.
Deceased: 1981

Eugene P. Pfleider is Professor Emeritus of mineral engineering at the University of Minnesota, where he taught from 1948 to 1974 and served as head of the School of Mineral Engineering from 1960 to 1963.

Professor Pfleider received his EM degree from the University of Minnesota in 1932 and spent the succeeding years in sulphur mining in Texas and Louisiana, tin mining in Bolivia, and manganese and nickel mining in Cuba. He was one of the pioneers in the development of lateritic nickel operations at Nicaro and Moa Bay and a consultant to companies opening mines in various countries of the world.

At the University of Minnesota, Professor Pfleider taught courses in the field of mineral economics, specializing in mine development, design and evaluation, and surface and underground mine planning. He participated in the early development of Symposia and was active in cooperative programs between mineral engineering schools.

Professor Pfleider was an active member of AIME on the local and national levels. He initiated the concept and edited the volume on Surface Mining and served on the Editorial Board and as an author for the Mining Engineering Handbook, both published by the Society of Mining Engineers of AIME.

In 1968 he received the AIME Mineral Industry Education Award and was an AIME Henry Krumb Lecturer in 1976. He has authored some fifty technical papers related to the mineral industry, with emphasis in the fields of mine design and evaluation, surface mining, drilling and blasting, and mineral economics.