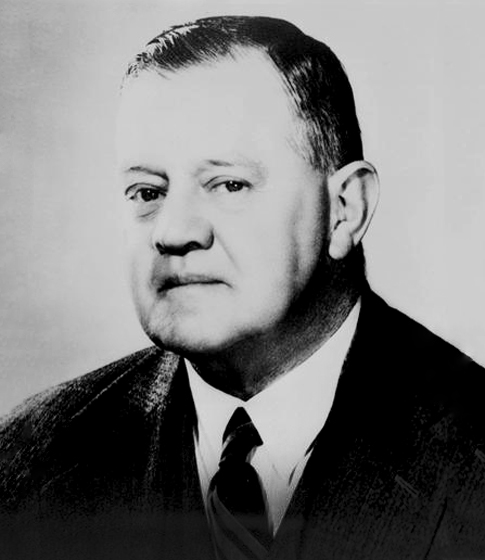 For his attainment as a mining engineer; for his outstanding achievements in the development and expansion of the Australian iron and steel industry; for his masterly industrial statesmanship in a world at war.
Deceased: 1962

Essington Lewis was born on January 13, 1881, at Burra Burra, South Australia. His primary education was undertaken at the government school at Burra Burra. At the age of 13, he was sent to St. Peter's College, Adelaide, to complete his secondary education. Lewis's school career was generally undistinguished except by its length, which resulted from sojourns spent on the family cattle property, and by his prowess in physical education.

In 1901 Lewis decided upon a career as a mining engineer and enrolled at the South Australian School of Mines. He was awarded his diploma in 1905, having completed his practical training in the employ of the Broken Hill Proprietary Co. Ltd. (BHP) at Broken Hill in the far west of New South Wales. Lewis joined BHP in 1904 as an underground miner in the company's silver-lead-zinc mine and by mid-1905 had progressed to the position of shift boss in the surface treatment plants. Later that year he was transferred to the company's lead smelter at Port Pirie on the Spencer Gulf in South Australia. There he undertook a variety of managerial jobs, rising to the position of assistant manager in 1913.

It was during this period that BHP took some decisions which were to have a significant bearing on Lewis's future. In 1912 the company committed large resources to the construction of a steelworks. The works were built at Newcastle in the northern New South Wales coalfield. They began production in 1915.

Lewis's horizons within the company expanded with this decision. Initially, he was given the responsibility for developing supplies of material for charging the blast furnaces. With the opening of the steelworks, Lewis moved to BHP's head office in Melbourne as the unofficial assistant to Managing Director G. D. Delprat. In confirmation of Lewis's rising prestige, he was appointed assistant general manager of BHP in November 1919, and with Delprat's resignation in February 1921 he became general manager.

For the next 20 years, Lewis presided over the destiny of Australia's largest industrial organization, steering the company through the fluctuating fortunes of post-war reconstruction, depression, and re-armament. Lewis was appointed as managing director and his elevation to the board in 1926.

Between 1919 and 1925 BHP became independent of outside shipping through its purchase of a small fleet of ore carriers to transport ironstone from South Australia to Newcastle. In the mid-1920s BHP also purchased collieries in the northern New South Wales coalfield, and in 1935 it secured mines on the southern and western coalfields as well.

Lewis also encouraged BHP to take a direct interest in a number of iron and steel fabricating industries that had grown up in response to Australia's increasingly protected domestic market for industrial manufacturers. Important purchases were made at cheap prices during the Depression. Where outright control was not possible or desirable, Lewis encouraged co-operation through joint share ownership with important British and American steel manufacturers in specialized areas of steel production such as tubes, industrial containers, and machine tools.

The Commonwealth government was increasingly aware of the significance of Lewis's contribution to Australian defense capability. In 1938 he was made chairman of the newly established Advisory Panel on Industrial Organization. In September 1939, together with Norman Myer, he was appointed business consultant to the Defense Department. In May 1940, faced with the need to mobilize industry on a broad front to prosecute the war, the Commonwealth government appointed Lewis to the office of director-general of munitions. In what was arguably the most responsible job held by an Australian up until that time, Lewis was given ultimate control over the production of all ordnance, explosives, ammunition, small arms, aircraft, and vehicles and of all machinery and tools used in producing such munitions.

In January 1942 Lewis's powers were extended still further by his appointment as director-general of the new Department of Aircraft Production. The extraordinary variety of materials produced by Lewis's two departments in the war years not only provided Australia with a considerable part of her means of waging war against Japan and Germany but also introduced a range of industrial techniques that were to have a profound effect upon Australian manufacturing industry in the post-war years. With support from all political groups, Lewis was awarded the Companion of Honour (CH) in 1943 in recognition of his services.

It was the apogee of his career. Although he returned actively to the position of chief general manager of BHP in 1945 and did much to promote the company's adjustment to peace-time conditions, he retired as chief executive of the company only five years later following the death of his long-time friend Harold Darling. He took the chairmanship of the board in 1950, but in 1952 he finally retired from a full-time position with BHP and occupied the part-time position of deputy chairman until his death at his country property in Victoria on October 2, 1961.

Lewis had not sought honours but many came to him. In 1940 he received the bronze medal of the Australasian Institute of Mining and Metallurgy; he was awarded the Kernot medal by the University of Melbourne in 1943 and the Bessemer gold medal by the Iron and Steel Institute, London, next year. He refused recommendation for a knighthood, but Curtin, lavish in his praise and diverging from party policy, initiated Lewis's appointment in 1943 as Companion of Honour.