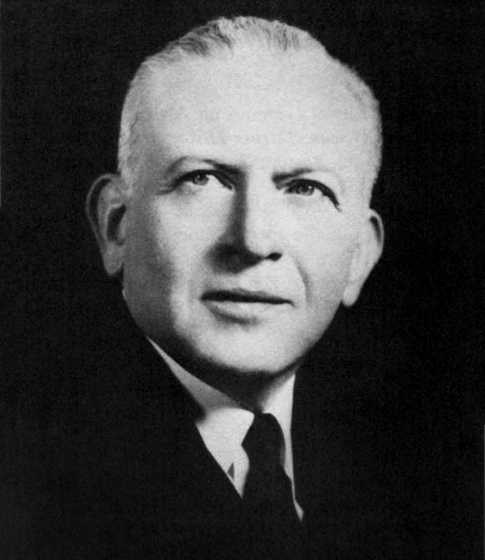 For leadership in advancing the science of metallurgy in its most rapidly developing period and in particular or his contributions to the understanding of the kinetics of the phenomena involved in the heat treatment of steel, including those associated with the microconstituent which carries his name, Bainite.
Deceased: 1971

Edgar Collins Bain was granted a B.Sc. in 1912 by Ohio State University. After three years as chemist at the National Bureau of Standards, he returned to that University to earn his master's degree in Physical Chemistry in 1916. He continued doctorate studies at the University of Wisconsin, being also Instructor in Metallography and Pyrometry. After a brief period with B. F. Goodrich Co. as a chemical engineer, he was commissioned first lieutenant in the Chemical Warfare Service, U.S.A.

In 1919 he became associated with Dr. Zay Jeffries at the Cleveland Wire Division, National Lamp Works, General Electric Co., where he pioneered in the use of X-ray diffraction in metallography. With Dr. Jeffries, he published an explanation for the high-temperature hardness of high speed steel, in 1923. In 1924, Dr. Bain joined the Union Carbide and Carbon Laboratories to study the alloys of chromium and authored a number of technical papers on these important alloys. For one of these, with W. E. Griffith, he was awarded the Robert W. Hunt Gold Medal in 1929. In 1932, he presented the Howe Memorial Lecture.

When U. S. Steel Corp. established its Research Laboratory at Kearny, N. J., in 1928, Dr. Bain was one of the first associates invited to join, in charge of physical metallurgy. He was promoted to Assistant to Vice-President in 1935 and became Vice-President, Carnegie-Illinois, later United States Steel Corp., in 1943. He retired as Assistant Executive Vice-President in 1957. He remained active as a Consultant for Union Carbide Corp. and Kennecott Copper Corp. until illness limited his activities. Because of Dr. Bain's illness, his son, David Erwin Bain, will accept the Certificate of Honorary Membership on behalf of his father.