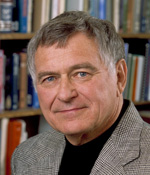 For long-term contributions to the SPE and the petroleum industry as an educator, mentor, author, leader and administrator with a strong focus on student advancement.

Don Green is the Deane E. Ackers Professor of Chemical and Petroleum Engineering at the University of Kansas where he has been on the faculty since 1964. He was chair of the Department from 1970-1974 and 1996-2000. He also served as Co-Director of the Tertiary Oil Recovery Project (TORP) from 1974-2007. TORP is a State funded program which carries out improved oil recovery research, development and technology transfer activities focused on independent oil operators in Kansas. Prior to joining KU, he worked two years for Continental Oil Company as a research engineer. Professor Green has won numerous teaching awards at the University, including the Chancellors Club Career Teaching Award. He has authored or co-authored several papers on the use of gelled polymers for conformance control which have appeared in the SPE literature and is co-author, with G. Paul Willhite, of the book Enhanced Oil Recovery published by the SPE. Professor Green holds a BS degree in petroleum engineering from the University of Tulsa and MS and PhD degrees in chemical engineering from the University of Oklahoma.