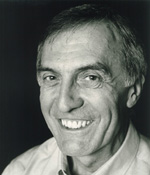 For being a long-time supporter of SPE in the USA, Canada and Europe whose business acumen was an essential component of SPE’s acquisition of half of Offshore Europe in Aberdeen.

Born and educated in England, Dave Keith joined Imperial Oil Ltd, in Alberta, Canada in 1965 as a reservoir engineer. In 1971 he commenced a consulting career in Trinidad, then in London, England, where, in 1977, he and a group of consulting and academic colleagues formed ERC Energy Resource Consultants Ltd. ERC conducted a large number of key international studies. Notably, it won the role of independent consultant to all of the UK oil and gas "Thatcher privatizations" from 1981 to 1987, imprinting the word probabilistic into the lexicon of reserve reporting! In 1988 he co-founded Seafield Resources plc, an E&P company that built interests in the UK, Eire, Netherlands, Italy, Tunisia, Syria, Ghana, Indonesia, Australia and New Zealand. Since 1997 Dave has taken on non-executive roles. He is now chair, a co-founder, of Challenge Energy Limited, an innovative advisory company, and a director of the Jersey investment fund, Gemini Oil & Gas Management Ltd. In 2001, Dave and his wife, Joyce, returned to Western Canada to enjoy semi-retirement, Dave retaining his links with the oil industry through Challenge and Gemini. Professional Activities Distinguished Member, Society of Petroleum Engineers Chartered Engineer, UK Professional Engineer, Alberta, Canada Fellow, Energy Institute, UK Member, Petroleum Exploration Society of Great Britain Footnote: Dave has long been an active supporter of professional groups such as the SPE. SPE London Section board from 1976 to 1980 (Chairman 1979/80). Director of SPE, Inc., representing the European Region, from 1986 to 1989. Chairman, SPE Europe Limited (a charity which manages the financial activities of SPE in Europe and Africa and owns 50 per cent. of the Offshore Europe Conference and Exhibition); from 1986 to 1989 and again from 1994 to 2000. Director of SPE Malaysia from 1994 to 2000. Elected Distinguished Member of SPE in 1993 and received Distinguished Service Award in 2002. Member of Petroleum and Petroleum Affairs Committees of Institute of Mining and Metallurgy from 1983 to 1988 and 1996 to 2001. Undertook Chartered Engineer accreditation visits, to inspect the B.Sc., B.Eng., M.Sc. and M.Eng. petroleum engineering courses at UK universities and assessment of C.Eng. applicants.