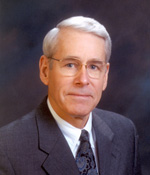 In recognition of his distinguished service to the steel industry and to AIME through his activities with TMS, ISS and AIST, and for his exceptional contributions to the fundamental knowledge of mechanical behavior, processing and performance of steel products, and his deep commitment to the development of the next generation of metallurgical professionals.

Prof. Matlock received his B.S. degree in engineering science from the University of Texas at Austin (1968), and his M.S. (1970) and Ph.D. (1972) degrees in materials science and engineering from Stanford University. He is the Armco Foundation Fogarty Professor in the Department of Metallurgical and Materials Engineering at Colorado School of Mines (CSM), Golden, Colorado. He joined the CSM faculty in 1972 and is involved in teaching and research, primarily related to the mechanical properties of materials. He is one of the co-founders and currently serves as Director of the Advanced Steel Processing and Products Research Center, an industry-university cooperative research center established at CSM in 1984. The Center currently has 25 corporate sponsors and is recognized as one of the most successful industry/university research centers in the world. Prof. Matlock is a Fellow of the American Society for Metals (ASM), a Fellow of the American Welding Society (AWS), and a member of the National Academy of Engineering. He has received numerous awards for teaching and research. In his 36 year career at CSM he has received outstanding teaching awards on many occasions including in 1987 being named the first CSM Outstanding Educator by CSMs President and in 2006 as the CSM Board of Trustees Outstanding Faculty Award recipient. His teaching and research efforts have led to awards from several professional societies including the Metallurgical Society of AIME, the Iron and Steel Society, ASM, AWS, the Society of Automotive Engineers, and the American Nuclear Society. He has authored or co-authored over 300 technical publications, mostly related to steels.