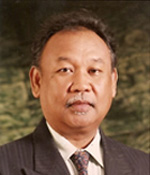 For being a champion of SPE in Malaysia and Southeast Asia on both a local and international basis, a supporter of creating the SPE office in Kuala Lumpur, and an active General Chair of and speaker at SPE conferences.

Dato' Mohamad Idris Mansor holds a Degree in Mining from Camborne School of Mines (UK); M.Sc. (Mining Geology and Exploration) from the University of Leicester (UK); and M.S. in Petroleum Engineering from the University of Tulsa, Oklahoma, USA. Dato' Idris joined PETRONAS in February 1976 as a Petroleum Engineer. In the ensuing years, he served as the Production Manager (1977-1980) and was later seconded to PETRONAS Carigali Sdn Bhd (PCSB), a wholly-owned subsidiary of PETRONAS, having served as the Deputy General Manager (1980-1984), General Manager (1984-1989) and Chief Executive Officer (1989-2000). He was appointed Senior Vice President and Board Member of PETRONAS from 1 October 1993 until his retirement on 30 September 2002. He served as Advisor to the Exploration and Production Business for another year. He was the Chairman of the Society of Petroleum Engineers (SPE), Asia Pacific (1995 to 2004), and now continues to serve as a Board Member of the Society. He is currently Adviser on International Exploration and Development Business, PTT Exploration and Production Public Company Limited of Thailand. He is also an Independent Non-Executive Chairman of KNM Group Berhad and an Independent Non-Executive Director of Alam Maritim Resources Berhad. Dato' Idris was conferred an honorary degree Doctor of Science by the University of Exeter, England in 1998.