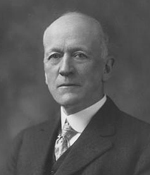 The fourth Secretary of the Smithsonian, Charles Doolittle Walcott, was a paleontologist noted for his discovery of the Burgess Shale fossils in Canada in the early twentieth century. Largely self-educated, Walcott worked for the New York State Museum and US Geological Survey (USGS), and advanced to become the USGS director from 1894 to 1907. He then served as Secretary of the Smithsonian until his death in 1927. Walcott was also a member of a variety of scientific and government boards and commissions, playing a central role in American science policy.

Born in 1850, in New York Mills, New York, like many of his predecessors, Walcott took to science at an early age. His native Hudson River Valley was rich in Middle Ordovician shale, so he explored, observed, and collected the fossils around him. He attended various schools in Utica, but never completed his formal education. Instead, he took his hobby of collecting fossils and turned it into a fairly lucrative career both commercially and scientifically. He then went to work for the State Museum in Albany as an assistant to the noted geologist James Hall, where he learned how to work in a museum setting. In 1879, Walcott secured an appointment to the newly formed US Geological Survey. He headed west for fieldwork and by 1894 became the survey’s director. He specialized in Cambrian layer locations and made important scientific contributions to geology and paleontology.

In 1907, Walcott left the Geological Survey to become Secretary of the Smithsonian. Walcott was not new to the Institution. In 1883, he was appointed honorary curator in the Department of Fossil Invertebrates, and by 1894 was in charge of the Smithsonian US National Museum’s paleontological collections. After much encouragement from Smithsonian staff, Walcott accepted a position as Assistant Secretary in charge of the US National Museum in 1897, while continuing to hold his position as director of the Geological Survey. In 1907, following the death of Secretary Samuel Pierpont Langley, the Smithsonian Board of Regents elected Walcott as his successor. He then left the survey and took over the reins of the Institution. Using his experience from the US National Museum, Walcott focused on the reorganization of the Institution. During his tenure, the "new" National Museum building, now the National Museum of Natural History, was built. He encouraged the growth of collections, and under his watch the Star Spangled Banner and the first ladies gowns were added to the museum. Walcott guided the Institution through significant events in American history. Sadly, after President Wilson's 1912 directives creating Jim Crow practices in the federal government, Walcott extended them to the Smithsonian. Some restrooms were divided and labor forces were segregated. When World War I broke out, Walcott closed the new museum building to the public to allow clerks from the Bureau of War Risk Insurance to work at makeshift desks packed into areas meant for exhibits. The bureau occupied the building from October 1917 to April 1919.

Walcott also strove to expand the Institution both physically and scientifically. Walcott served on the National Art Committee formed in 1919 to document America’s role in World War I. The portrait collection the committee amassed later became a part of the Smithsonian’s National Portrait Gallery. In 1927, Walcott launched the Smithsonian’s first strategic plan. On February 11, 1927 Walcott planned to host the Conference on the Future of the Smithsonian, a preliminary step to the Institution’s first capital campaign. Invitees included eminent scientists and academics, politicians, and prominent federal employees. Museum curators erected exhibits to display the collections and research done at the Smithsonian. Sadly, on February 9th, two days before the conference, Walcott died. The conference was hosted by Assistant Secretary Charles Greeley Abbot, who was later named Secretary.