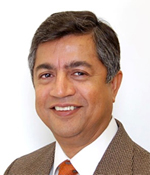 For his unique and seminal contributions to the oil and gas industry in the areas of reservoir engineering, reservoir modeling, production engineering, and reserves and uncertainty analysis; and for serving as a model of volunteerism in his service to SPE.

C. Shah Kabir is the proprietor of CS Kabir Consulting. He has had 40 years of experience in the oil industry with stints at Dome, Arco, Schlumberger, Chevron, and Hess. His experiences include pressure- and rate-transient analysis, wellbore fluid- and heat-flow modeling, many aspects of reservoir engineering, and testing and performance forecasting in unconventional reservoirs. He has published more than 140 papers and two books, and contributed in SPE Transient Well Testing monograph. His experiences involved studying major oil provinces, including those in North America, North Sea, Middle East, and Far East. He received his bachelor’s (1972) and master’s (1974) degrees in chemical engineering from Bangladesh U of Eng & Tech, Dhaka, and a master’s degree (1976) in chemical engineering with petroleum engineering specialization from the U of Calgary, Canada.