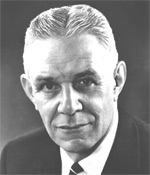 Augustus Braun Kinzel retired as vice president, research of Union Carbide Corporation. He is a fellow of The Metallurgical Society of AIME and is currently a director and consultant to several nationally known corporations.

Dr. Kinzel received an A.B. degree from Columbia University in 1919 and a B.S. from Massachusetts Institute of Technology in 1921. He earned doctorates in science and metallurgical engineering at the University of Nancy, France. In 1926 he joined Union Carbide and Carbon Research Laboratories, Inc. He became its president in 1948.

From 1955 until his retirement in 1965, Mr. Kinzel was vice president, research for Union Carbide Corporation. He holds AIME's James Douglas Gold Medal and is a past Howe Memorial Lecturer. Last year he was Regents Lecturer at the University of Southern California. He holds over 40 United States patents and is the author of more than 60 technical papers.