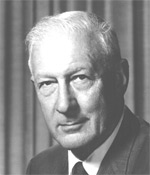 For his contributions as a scientist, educator and author; specifically his leadership and direction, and the development of leaching and recovery techniques for low grade uranium ores.
Deceased: 1974

Antoine Marc Gaudin is the Robert H. Richards Professor Emeritus of Mineral Engineering at the Massachusetts Institute of Technology. He became Professor Emeritus in 1966 after serving since 1939 as the Robert H. Richard Professor. He is currently a consultant to many industrial concerns for the management of industrial research and for the design and development of new mineral-recovering processes and plants.

Dr. Gaudin was graduated in 1917 from the University of Aix in France and in 1921 was granted an Engineer of Mines degree from the School of Mines of Columbia University. In 1941, the Montana School of Mines bestowed on him the honorary degree of Doctor of Science.

In addition to his long career in mineral industry education, Dr. Gaudin has served as an advisor to the U.S. Bureau of Mines, the National Academy of Sciences, the Office of the Science Adviser of the President, the U.S. Atomic Energy Commission and several foreign governments. His work has been recognized by many awards including the AIME Robert H. Richards Award (1957), the Mineral Industry Education Award (1969) and the Chemical Engineering Achievement Award of Chemical Engineering. The Institution of Mining and Metallurgy of London honored him as their Sir Julius Wernher Memorial Lecturer and he has been chosen by AIME as their Extractive Metallurgy Lecturer ( 1961) and Henry Crumb Lecturer ( 1969).

Dr. Gaudin has been active in many scientific and engineering organizations. He is a Legion of Honor Fifty-Year Member of AIME, a Fellow of the American Academy of Arts and Sciences, and Honorary Member of the Institution of Mining and Metallurgy of London and he participated in the founding of the National Academy of Engineering. He has authored a book entitled Flotation, Principles of Mineral Dressing and over 150 technical papers.