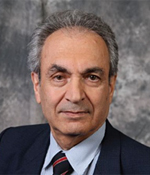 For his more than 46 years of professional services to the industry, academic institutions and the SPE, making immense contributions to the understanding of the science and physics of rock mechanics and hydraulic fracturing in the oil and gas industry.

Ali A. Daneshy is President, Daneshy Consultants Int’l, Inc. His areas of expertise include well completion and hydraulic fracturing, geo-mechanics, intelligent completions, ICD applications and design, and water control. He has served as Director of Petroleum Engineering at the University of Houston from 2004 to 2007 and VP of Integrated Technology Products, Halliburton Energy Services in Houston Texas, from 1996 to1998 where he was responsible for integrating leading-edge technologies into the oil and gas services business. Daneshy has had management assignments in Europe, Africa, the Middle East and Asia Pacific and he is conversant in several languages. He is very familiar with global operations of the oil and gas industry. As operations Technical Manager for the Europe/Africa Region of Halliburton, London England he had technical responsibility for all areas of Halliburton services. He also held the position of director of European Research Center for Halliburton, Leiderdorp, Holland in 1989. He was the Manager of Reservoir Research & Engineering for Halliburton, Duncan OK in 1985 with responsibilities in the areas of rock mechanics, fracturing, and reservoir engineering. He has held several other technology management positions in the areas of well stimulation, geo-mechanics, produced water management, software development, fluid mechanics, on-site data acquisition systems, etc.

He was named an SPE Distinguished Lecturer in 2004–2005 and was named an SPE Distinguished Member. He served as a director-at-large on the SPE Board of Directors from 2004 to 2007, chaired the board’s Audit Committee from 2005 to 2006, and chaired its Committee on Education from 2006 to 2007. Daneshy has chaired several other SPE committees, including the Transactions Editorial Review Committee, the Publications Review Committee, the North America Forums Committee, and the Meetings Evaluation Committee. He also founded the SPE Forum Series in Asia Pacific in 1990.