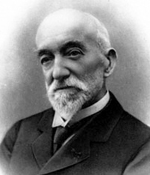 Alexandre Pourcel who died at the age of 93 years was a distinguished engineer at who has made great progress in steel. Born in Marseille in 1841, emerging from the Ecole des Mines de Saint-Etienne, he entered the Forges de Terrenoire where he was pursuing a large part of his career first as an engineer and then as director. He was the first to use the ferro-manganese 80 100 for making armor steel Bessemer. He contributed greatly to elucidate the role of manganese and silicon in the purification of molten metal and to make steel castings without blistering.

He then prepared the ferro-silicon alloy, which today plays a vital role in the steel industry, and the manufacture of other special metals chromium and tungsten. His research led to an unexpected result: the recognition of the qualities of chromite as refractory material in high temperature furnaces.

In 1877, Mr. Pourcel summarized, most clearly what had been the point of view way, its removal from the cast and shows what este do it. Came the discovery of Thomas and Gilchrist, M. Pourcel understands the full extent, it immediately began to pass the theoretical field to industrial production, and in 1880, it runs the first four basic Martin. It was the dawn of a true metallurgical evolution;. The first effect would be to move to France the center of gravity of the steel industry to Lorraine.