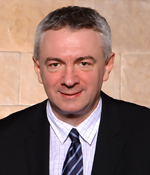 For his outstanding contributions to the research, education and service in surface coal mining, and for his international recognition as a researcher, teacher and academic leader.

Vlad Kecojevic is a Professor of Mining Engineering and the Massey Foundation Professor at West Virginia University. He was an Assistant Professors, and then Associate Professors at Penn State from 2001 through 2009. Prior to joining Penn State, he was employed with Krupp Canada (ThyssenKrupp) from 2000 to 2001 and he was responsible for the design of mining equipment. He was also involved in planning and design of coal, bauxite and limestone mines in Serbia and Montenegro from 1992 through 2000. He earned his B.S., M.S., and Ph.D. degrees in Mining Engineering from the University of Belgrade in 1991, 1996, and 2000, respectively. Vlad has served as the 2015-2016 President of the international Society of Mining Professors; the 2015 SME Program Chair; the 2013 Chair of the SME Coal and Energy Division; and the 2011 Program Chair of the SME Coal and Energy Division.