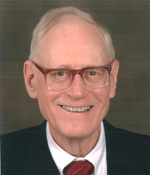 For his dedication to the best interests of the coal mining industry, the university and its students and a champion for the preservation of our mining heritage.

Watts currently serves as the associate dean for administration ofthe College of Engineering and Mineral Resources at West Virginia University. He has served in numerous administrative and teaching positions during his 48 years of service at WVU. He also served as secretary of the University Senate for three plus years. In 2005, the West Virginia Coal Mining Institute endowed WV's Mining and Petroleum and Natural Gas Museum, and requested that it be renamed The Royce J. and Caroline B. Watts Museum "for two individuals who have tirelessly supported its mission through both financial support and other resources on behalf of the museum for more than two decades." The purpose of the museum is to preserve and promote the social, cultural and technological history of the coal, oil and gas industries of the state of West Virginia through the collection, preservation, research and exhibition of tangible objects relevant to the industries. Watts has served as assistant secretary-treasurer or secretary-treasurer of the West Virginia Coal Mining Institute for the past 26 years. The West Virginia Coal Mining Institute was formed in 1908 as a professional organization to enhance the social and professional growth of those persons engaged in the mining industry. The original objectives of the Institute are still valid today. In this regard, Watts was recognized as a Distinguished West Virginia in 1997 by Governor Cecil H. Underwood for his contributions to the continuing education of mining professionals. He has been active in the Central Appalachian Section of SME. Watts combined a distinguished military career with his university appointment. He received twelve military awards, including the Silver Star, the natio's third highest military award for conspicuous gallantry in action against an armed enemy of the United States. This award was given for his service with the Second Infantry Division during the Korean Conflict in 1951. He retired with the rank of colonel in 1989. Watts earned his B.S. and M.S. degrees from West Virginia University. In addition to his administrative duties, he continues to teach at least one course in statistics during each academic year.