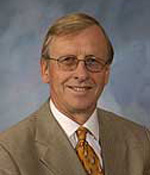 For his distinguished achievements as an engineer, entrepreneur, researcher and consultant in coal and energy resulting in furtherance of innovative practical solutions to many aspects of the expanding international energy industry.

Symonds received an honors B.S. degree in mining engineering from Newcastle University, UK and a Ph.D. in coal preparation from Nottingham University, UK. He emigrated from England to Canada in 1971 and worked in the Canadian coal industry until 1976, in the areas of coal preparation plant design and coal testing. He was transferred to the US and became Vice President of Birtley Engineering Corporation in Salt Lake City and worked throughout the US on coal mining, handling and preparation projects. Symonds is a co-founder of Norwest Corporation, an employee owned energy minerals consulting group headquartered in Salt Lake City and Calgary. He served as President of the US Company from 1980 until 2004. He became Chairman of the US and Canadian companies in 2005. The company has ten offices in Asia and North America. He has worked on coal related projects in the US, Canada, Australia, South America, Europe and south and central Asia. He has authored numerous papers on coal mining issues as well as chapters in three SME sponsored text books on mineral processing and coal preparation. He is a member of the Board of Governors of the Manufacturers and Services division of the National Mining Association and was the co-chair of the technical sessions for Minexpo 2004. He is President elect of the Coal Preparation Society of America and has been an active member of SME for thirty years.