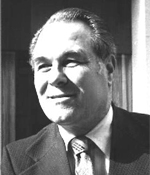 In appreciation of his long service in environmental protection for the petroleum industry and, in particular, recognition of his efforts to studies of the fate and effect of petroleum in the marine environment.

Edward W. Mertens is the Manager, Ecological Programs in the Environmental Affairs Department, Chevron, U.S.A., Inc., San Francisco. He joined the company at the close of World War II, and held various research and research management assignments in the heavy fractions of oil ... those fractions that are most persistent when oil is spilled. Nearly twenty years ago, he became involved in the health and environmental problems of petroleum products, and, for the past twelve years, has concentrated entirely on environmental problems.

Mr. Mertens organized and chaired the American Petroleum Institute's Committee on the Fate and Effects of Oil in the Marine Environment from 1970 to 1978, continuing to serve on the committee as an active member. He is Vice-Chairman of the API's Natural Resources Assessment Task Force, and a member of its Outercontinental Shelf/Coastal Zone Management Committee. He is also a member of the New England Marine Industries Council and of the American Society of Civil Engineers Environmental Impact Analysis Research Council, and of the Environmental Protections Task Group of the National Petroleum Council's Alaska Oil and Gas Study.

Mr. Mertens has participated extensively in workshops, seminars, symposia, conferences and offshore lease sale hearings concerning the effects of oil in the marine world. He is the author of numerous papers on this subject, and some twenty-five patents deal ing with the heavy fractions of oil.