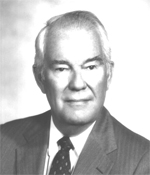 "For his outstanding leadership ability in contributing to the nation 's understanding of environmental laws and affairs in their application to the mining industry."

Edward R. Bingham is Corporate Director, Exploration & Technical Services with AMAX, Inc. He was graduated from the University of Utah, College of Mines. with a B.S. in Geology. Upon graduation, Mr.Bingham joined Kennecott Copper Corp., working for six years in mineralogy and instrumental analysis on R&D projects and on development of process control systems. In 1964 he accepted the position of Chief Chemist at White Pine Copper Company, and in 1976 was appointed Vice-President of the parent Copper Range Company. Mr. Bingham joined AMAX in 1977 as President of AMAX Environmental Services, Inc., and in 1985 was given the additional responsibilities of managing AMAA Inc.'s exploration activities. environmental affairs, and the central engineering function.

An active participant in American Mining Congress environmental activities, Mr. Bingham has served as Chairman. Water Quality Control Subcommittee. He accepted Chairmanship of the Environmental Matters Committee in 1978 and served in that capacity and until 1985, working on the development of policy for the Mining Congress on various environmental issues and providing guidance to the several subcommittees on water quality, air quality, and waste management issues. Mr. Bingham has been a member of the Society of Mining Engineers since 1968.