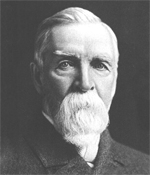 John Fritz was born in 1822 in Chester County, Pennsylvania. He was apprenticed as a blacksmith and became a wheelwright. He later supervised the building of an iron making furnace. In 1860 he became General Superintendent and Chief Engineer of the Bethlehem Iron Works. In 1864 he supervised the building of a Bessemer converter for the firm. In 1872, one year after its founding, he became a member of AIME and was elected President in 1894. He subsequently became President of AIME's sister organization, the American Society of Mechanical Engineers (ASME) in 1895-1896. He was also elected Honorary Member of AIME, ASME, and their sister organization, the American Society of Civil Engineers (ASCE). After retiring in 1892 he became a trustee of Lehigh University and engaged in other civic work in the community. He died in 1913 in Bethlehem, Pennsylvania.

The John Fritz Medal for Scientific or Industrial Achievement