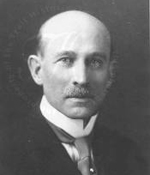 Mr. Aldridge is a descendant of Commodore Isaac Hull, commander of tlie historic old "Constitution," which wrought such havoc with the British ships during the war of 1812; General William Hull of Revolutionary fame, who was with Washington at the battles of Princeton and Trenton, and Commodore Perry, the hero of the battle of Lake Erie.

Mr. Aldridge received his primary education in the public schools of Brooklyn, leaving to enter Brooklyn Polytechnic Institute. He followed this with attendance at Columbia University la New York City and was graduated from the latter institution in June, 1887, as Engineer of Mines. Almost Immediately after his graduation Mr. Aldridge became Assayer for the Colorado Smelting Company, which owned the famous Madonna Mine and a smelting plant at Pueblo, Colorado. This company was controlled by Abram S. Hewitt, New York City's noted Mayor; General Davis of New York, and the Seligmans, bankers, and Anton Ellers, the latter being General Manager, and Otto Hahn, Superintendent. Mr. Aldridge later became Chemist and Metallurgist for the company.

In 1892, after five years of successful work in his chosen lines, Mr. Aldridge left the Colorado company to become manager of the United Smelting & Refining Company, which was owned by the same group of capitalists. This company operated a large custom smelting plant at East Helena, Montana, another at Great Falls, Montana, and a refinery at South Chicago. The United was absorbed by the American Smelting & Refining Company after Mr. Aldridge severed his connection with it to take a position with Sir William Van Horne, President of the Canadian Pacific Railroad, and afterwards with Sir Thomas Shaughnessy, who became President. He was placed in charge of all the mining and metallurgical work of the railroad, and soon was among the foremost mining men of the American Continent. During his connection with the railroad he established extensive lead and copper works at Trail, B. C., and an electrolytic lead refinery. This latter was the first plant of its kind the world ever saw and has since played an important part in the industrial history of Canada. Through that institution, Canada produced its first refined lead, silver and gold, Mr. Aldridge thus being responsible for the introduction into the Dominion of one of its most important modern industries. An interesting historical feature in connection with the plant is the fact that it produced for Japan most of the lead which that nation used during the memorable war with Russia, the contest that made Japan a nation of the first class and awakened the rest of the civilized peoples to the fact that the Mikado's country was entitled to rank as a world power.

Mr. Aldridge's next big work, following the installation of the electrolytic works, was the development of the Hosmer and Bankhead coal mines. The dust from the Bankhead coal, which is semi-anthracite, was utilized for the manufacture of coal dust briquettes, which were produced for the first time on a commercial scale by the Zwoyer process.

The metal mining interests of the railroad company were incorporated under the name of the Consolidated Mining & Smelting Company, which controlled many of British Columbia's largest lead, silver, gold and copper mines, as well as the large reduction works at Trail.

Mr. Aldridge resigned his position as Managing Director of the Consolidated Smelting and Refining Company and other Canadian Pacific Railway institutions to become associated with William B. Thompson of the Gunn-Thompson Company of New York. Mr. Aldridge has charge of Mr. Thompson's extensive milling interests, which include Inspiration Copper Company (Managing Director), Mason Valley Mines Company (Consulting Engineer), Magma Copper Company (Consulting Engineer), Gunn-Quealy Coal Company (Consulting Engineer) and the Mines Company of America. As Managing Director of the Inspiration Copper Company, which, after consolidation with the Cole-Ryan Syndicate's Live Oak mine, has forty-five million tons of two per cent copper ore, Mr. Aldridge had supervision of the extensive mine development and concentrator, which will involve a capital outlay of $7,000,000. Associated in these companies with Mr. Thompson are some of the principal men in the Amalgamated Copper and United States Steel groups of financiers, besides other large New York interests.

In addition to the companies already mentioned, Mr. Aldridge is a Director in the Consolidated Mining & Smelting Company, the Hosmer Mines Company, the Bankhead Mines Company and the High River Wheat & Cattle Company, the latter four being Canadian corporations.