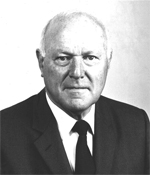 For his outstanding contributions of leadership, dedication, and technical management to the mining industries of Australia and Papua New Guinea.

Sir Frank was graduated from the University of Adelaide with a degree in mining engineering. His professional career began in 1947 and spanned 32 years with the CRA Group of Companies.

Sir Frank was awarded the Order of the British Empire in 1971 and Knight Bachelor in the Queen's New Year Honours in 1979. Sir Frank holds directorships in a diversity of companies and is the Chairman of the National Petroleum Advisory Committee, a Federal Government body.