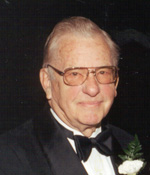 In recognition of a lifetime of distinguished contributions to the mining industry, particularly for his leadership of Phelps Dodge Corporation and as a founder of the National Mining Hall of Fame and Museum.

Richard T. Moolick is currently chairman of National Mining Hall of Fame and Museum in Leadville, Colorado. He was instrumental in establishing it in 1987. During World War II, Mr. Moolick was a Naval combat pilot in the Central Pacific. Following the War, he attended the University of Arizona's School of Mines, graduating in the Spring of 1949. He was immediately employed by Phelps Dodge and spent 20 years at Phelps Dodge, gradually working up through geologist, mine planning engineer, chief geologist, assistant chief engineer, chief engineer and then general superintendent. Among his accomplishments were the discoveries of the Metcalf and Dos Pobres Orebodies. In 1969, Mr. Moolick took over the management of Tyrone, NM, and brought it into production. In 1973 he was transferred to Douglas, Arizona as assistant general manager of Western Operations and in 1975 moved to New York where he was promoted from vice president to president. He was instrumental in positioning PD in Chile where the Candelaria Orebody was acquired, and he turned Western Nuclear around just before the uranium bust.