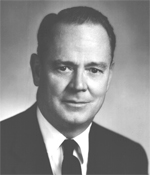 Joseph Hugo Reid was born in Coalgate, Oklahoma, in 1901. In 1917 he received a BS in Mining Engineering from the School of Mines and Metallurgy, University of Missouri, and an EM from the same University in 1930.

Prior to graduation, Mr. Reid worked in Oklahoma coal mines, in the zinc-lead mines of the Tri-State District, and in metalliferous mining operations in Montana, New Mexico, and Colorado. He joined National Lead Company in 1927 as a Mining Engineer and, until 1935, directed most of its exploration work. He was then appointed Manager of the Company's Silica Products Works and, in 1939, Production Manager of its Baroid Division. In 1946, Mr. Reid became Chairman of the Mining Committee and a year later, was transferred to the Titanium Division of which he has been General Manager since 1949.

In the course of his various assignments, Mr. Reid has been either closely associated with or in direct charge of development of harite deposits in Missouri, Arkansas, California, Nevada, and Brazil; hentonite clay deposits in Wyoming, South Dakota and California; and ilmenite deposits in New York, Florida, North Carolina, New Jersey, and Norway.