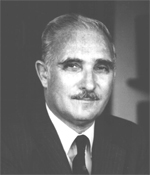 For his engineering foresight and creative leadership in the development of one of the largest and most diversified resource companies in the world.

John Towers, President and Director of AMAX Inc. has been named 1982 recipient of the William Lawrence Saunders Gold Medal. Mr. Towers first joined AMAX's United States Metals Refining Company in 1946, rising through the ranks of management to become president of USMR, then a vice president of AMAX, a member of the board of directors, executive vice president, and in 1977, president. During these years, he played a major role in AMAX's evolution into a leading mining company and in its transformation from a company heavily dependent on overseas investments and metal trading activities into a diversified operating company supplying a wide variety of minerals. metals and energy materials on a worldwide basis.