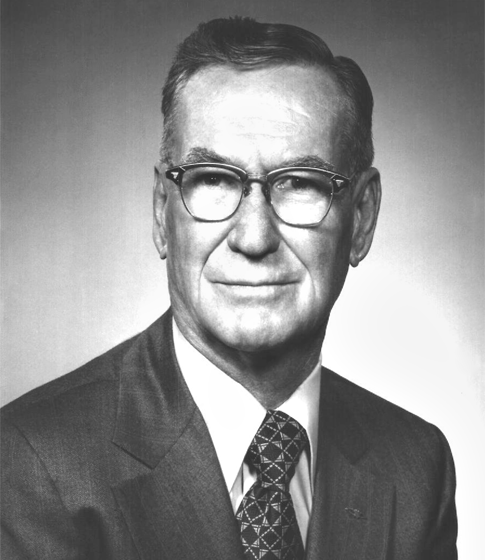 "For his versatility and courageous leadership in pioneering, exploring, developing and managing highly successful mining ventures as a leader among men - yet one of them.''

John Ballantine Knaebel was born in Denver in 1906. He attended Cornell and Stanford. From the latter he received a B.S. in Engineering in 1929 and the degree of Engineer of Mines in 1930.

From 1931 to 1933, he served as Assistant Mining Engineer, U.S. Bureau of Mines, in Washington, D. C., Berkeley and San Francisco. Then he went to the Philippines for East Mindanao Mining Co. to prospect a virgin jungle region. He discovered, designed, and managed a profitable operation, producing gold bullion. Until 1939, he was active in a succession of ex· ploration projects ranging from Central America to British Columbia.

With U. S. Smelting, Refining & Mining Co., from 1940 to 1946, he played a leading role in the preliminary development leading to production of two properties - the Bullfrog Mine at Bayard, N.M., and the Gold Hill Mine near Wendover, Utah. At the latter, in four months, he put an isolated and abandoned arsenic mine on a production basis of 300 tons per day.

From 1946 to 1951 he managed for the Anaconda Co. two exploration ventures, one in Brazil and the other in British Guiana. In 1951 he pioneered Anaconda's entrance' into the uranium business in New Mexico. His efficiently conducted prospecting discovered and concentrated extensive operations, the chief being the Jackpile opencut mine near Grants, which moves some 45,000 tons of waste and ore per day. This was the first successful large scale mining and milling uranium operation in North America and was Mr. Knaebel's direct responsibility.

In 1956, Mr. Knaebel was appointed Assistant to Vice President in Charge of Mining Operations, The Anaconda Co., N. Y. He became a Consultant in 1958 and lives in Grants, N.M. He has been a member of AIME since 1929.