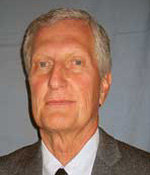 In recognition of an exemplary career as a mining engineer and executive for the Phelps Dodge Corporation; and his steadfast devotion to improving the quality of life for miners and mining communities.

James Madson is presently a Senior Associate and Adjunct Professor with the University of Arizona Mining and Geological Engineering Dept and their International Center for Mine Health, Safety and Environment. The mission of "Center" is to promote creative, fiscally responsible and sustainable improvements in the health and welfare of miners, mining communities and their environment. He retired from Phelps Dodge Corporation in 1999 as Vice-President of Phelps Dodge Corporation and Executive Vice President of Phelps Dodge Mining Company. At that time, James was responsible for Phelps Dodge Mining Companies domestic and international mining operations. During my 34 years with Phelps Dodge, He held many positions within the mining company and worked at their Morenci, Arizona, New Cornelia in Ajo, Arizona and the Tyrone Branch in Silver City, New Mexico, as well as their corporate headquarters in Phoenix, Arizona. He is presently on the University of Arizona, Mining and Geological Engineering Industry Leadership Board and Strategic Planning Committee, as well as a member of the Society for Mining, Metallurgy and Exploration (SME). James is past Chairman of the Arizona Mining Association and The Arizona Conference of AIME. He is a former member of the National Mining Association and the Western Governors. He attended Dartmouth Colleg's Executive Program and received his B. SC. in Mining Engineering from Ohio State University.