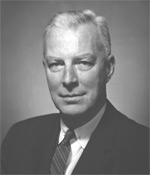 "For distinguished administration in the finding and developing of important new mines, inspiring leadership in the mineral industry, and unstinting service in the nation's mineral procurement in times of vital need."

After receiving an A.B. degree from Stanford University, Francis Cameron began his active career in 1925 as an assistant foreman and engineer for the Chief Consolidated Mining Company of Eureka,. Utah. He soon became chief geologist for International Smelting Company in Salt Lake City, and in 1928 was named field geologist for Anaconda Copper Company.

While with Anaconda until 1945, he conducted extensive mining examinations and explorations in this country and abroad.

During the second world war, Mr. Cameron was active in supervision of foreign and domestic mineral procurement of the government's Metals Reserve Company and the War Production Board and later as a member of the U.S. Atomic Energy Commissions Advisory Board for Raw Materials Supply during 1953-56. In 1961 he received an honorary D.Eng. degree from the University of Missouri for "development of mining" in that state. He is a Fellow of the Geological Society of America and a past president of the Society of Economic Geologists. He is a member of many civic and professional societies including AIME.