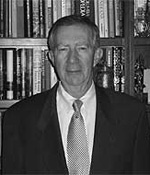 For his vision and leadership in creating and building a leading global supplier of molybdenum - the Thompson Creek Metals Company - and for his dedicated support of minerals education as a Trustee of the Colorado School of Mines.

Mr. Mooney is currently the Chief Executive Officer of the Thompson Creek Metals Company, a privately held company which owns and operates two molybdenum mines, the Thompson Creek Mine in central Idaho and the Endako Mine in British Columbia, and Langeloth Metallurgical Company, a metal processing facility in western Pennsylvania. The group of companies now employs over 500 people and is the second leading molybdenum producer in the country. Mr. Mooney began his professional career in 1956, after graduating from the Colorado School of Mines with a degree in Geological Engineering, when he joined the Utah Mining Company (now BHP Minerals). He worked in exploration and mine operations in Wyoming and Peru. He later worked for the U.S. Borax Corporation in New Mexico and then for 18 years with the Gulf Oil Corporation. He was eventually Executive Vice President of Gulf Mineral Resources Company in Denver and Vice President and General Manager of one of Gul's three domestic oil and gas production divisions. Following the merger of Gulf and Chevron in 1985, he joined Cyprus Minerals Company in Arizona and Denver. He retired from Cyprus in 1993 at which time he was President of the Cyprus Copper Company, a division of Cyprus Minerals. He subsequently formed the Thompson Creek Companies. In 1990, he was awarded the Distinguished Achievement Medal by the Colorado School of Mines. He served on the Board of Trustees of that university for two terms and was President of the Board in his second term. He has been a long-time member of the American Institute of Mining and Metallurgical Engineers and is a Director of the American Mining Association. He is a Registered Professional Engineer in Colorado. In 1957, he was on active duty with the U.S. Army Corps of Engineers. Mr. Mooney was born in Denver in 1934 and attended public schools there. He is married to the former Gayle Dodson. They have six children and reside in Cherry Hills Village.