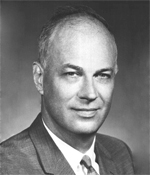 Dr. Walter R. Hibbard Jr., director of the Bureau of Mines, has been eminent in earlier work in education and research and development, and in directing metallurgy and ceramics research.