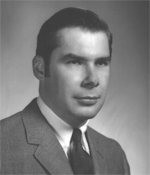 James H. Swisher is a member of the technical staff in the Research Department, Bell Telephone Laboratories. Last year, he also received the Raymond Award for his paper "Internal Oxidation of Iron-Manganese Alloys."

Dr. Swisher received his B.S., M.S. and Ph.D. degrees from Carnegie-Mellon University in 1959, 1962 and 1963 respectively. After obtaining his doctorate, he worked as an aerospace technologist in the Materials and Structures Division of NASA on assignment as a U.S. Army officer.

The 1970 Raymond medalist left NASA in 1965 and joined U.S. Steel Company's Fundamental Research Laboratory where he worked in the Chemical Metallurgy Division for two years.

Dr. Swisher has been with Bell Labs since 1967. In addition to AIME, he holds membership in Tau Beta Pi and Sigma Xi honorary societies.

The Rossiter W. Raymond Memorial Award was established in 1945 to honor one of the Institute's founders who also served as president and secretary. It consists of $250 and a certificate recognizing the best paper published by AIME and written by a member under 33 years of age. Papers are judged on the basis of technical content, proficient presentation, and fluency of style.