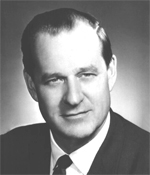 Donald A. Dahlstrom became Research Professor of Metallurgy at the University of Utah in 1984, upon his retirement as Senior Vice President of EIMCO Corporation. Dr. Dahlstrom attended Macalester College and the University of Minnesota, receiving a B.S. in Chemical Engineering from the latter. He earned his Ph.D. at Northwestern University. While with the company he became internationally known for his work in liquid-solids separation, environmental control, and process technology. Dr. Dahlstrom joined AIME in 1949 and has served in a variety of offices including Chairman of the Minerals Beneficiation Division in 1964, President of SME in 1974, and a Director and Vice President of AIME. He served as President of the American Institute of Chemical Engineers In 1964 and was also National President of Tau Beta Pi from 1954 to 1963. Elected to the National Academy of Engineering in 1975, his other honors include the AIME Rossiter W. Raymond Award, the AIME Robert H. Richards Award, and the SME Arthur F. Taggart Award. He was also an AIME Krumb Lecturer. He is a recipient of the AIChE Founders and Environmental Awards and a Merit Award from Northwestern University. At their 75th anniversary celebration in 1983, AIChE recognized Dr. Dahlstrom as one of only thirty "Eminent Chemical Engineers."