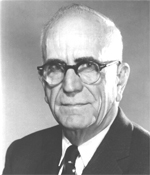 "In recognition of his dedicated service, many contributions and his pioneering work in the application of fluidized-bed techniques to the minerals industry."

Theodore B. Counselman, partner in the consulting firm of Behre Dolbear and Company, Inc., is one of the pioneers in developing the flotation process with respect to copper. A native New Yorker, he attended Columbia University's School of Engineering and Applied Science from which he was graduated with an EM degree in 1910. Following graduation, he spent considerable time at copper properties in Arizona and northern Mexico, and the experience led to his specialization in ore concentration.

In 1916, he moved to Minnesota to work on a method of concentrating the low grade magnetites of the eastern Mesabi Range. From 1928 until his retirement in 1955, he worked for The Dorr Company. While working in the Michigan copper country, he introduced innovations into the flowsheet that made possible the application of flotation. Another of his achievements was the perfection of wet closed circuit grinding of raw materials for cement.

Upon retirement from Dorr, he joined Behre Dolbear and Company where he is now a partner, treasurer, and the metallurgical specialist. Active in the Engineering Alumni Association at Columbia of which he is a past president, he was awarded the Columbia Alumni Medal in 1961 and the Egleston Medal of the association in 1966.