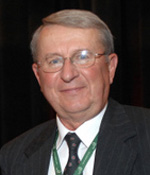 For his outstanding contributions to the iron ore industry and SME, his pioneering role in the development of Tilden, and his relentless efforts to introduce new technology for iron ore concentration.

Ron retired from Cleveland Cliffs in 2001 as Director of International Projects.  Since his retirement, Ron takes on occasional consulting jobs mostly on international projects including SEC audits, due diligence, technical audits and general minerals processing consulting.