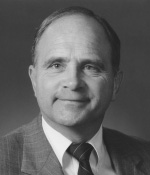 "For his advancement of the Art of Mineral Processing by prolific innovation of concepts reflecting the highest quality spirit of an educator, engineer, inventor and dedicated researcher."

Jan D. Miller received his S.S., with distinction, from The Pennsylvania State University, and his M.S. and Ph.D. 1n Metallurgical Engineering from the Colorado School of Mines. Dr. Miller, who has been a research engineer with the Anaconda Company and at the Lawrence Livermore Laboratories as well as a consultant to industry and government agencies, joined the Metallurgy and Metallurgical Engineering faculty at the University of Utah in 1968 and currently holds the rank of Professor. He has been actively involved in research on the processing of coal and mineral resources. He serves on the editorial boards of several technical journals including Coal Preparation. International Journal of Mineral Processing, Hydrometallurgy, and Solvent Extraction and Ion Exchange.

A member of the American Chemical Society, the Fine Particle Society, as well as both SME and TMS, Dr. Miller has served on the SME Board of Directors and is a past chairman of the SME Mineral Processing Division. He was the eleventh recipient of the Van Diest Gold Medal given periodically by the Colorado School of Mines. He has also received the TMS/ASM Marcus A. Grossman Award, the SME Arthur E. Taggart Award in 1986 and was selected as an AIME Henry Krumb Lecturer for 1987.