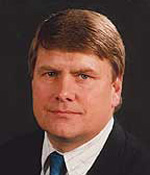 For outstanding contributions to precious metals recovery and leadership in plant management.

Jim Arnold is the Vice President Technical Services for Coeur 'Alene Mines Corporation. His background is primarily in operations and engineering where he served as General Manager for several mines and development projects for Gold Fields Mining Corp., Santa Fe Pacific Gold Corp., and Kinross. Arnol's background is an operating mix of process metallurgy, mining and maintenance. Before joining Coeur 'Alene Mines he served as Principal, President and CEO of Knight Piesold and Co. in Denver, Colorado. He has also worked for Kennecott in Missouri and W.R. Grace in Montana. During his tenure in Nevada, Arnold served on numerous committees with the Nevada Mining Association including Chairman of the Environmental Committee and Wildlife Subcommittee where many of the Stat's environmental regulations were developed. Arnold also served on the Board of the NvMA and as Chairman of the Association in 1995. He is a member or contributor to the Missouri Mining Industry Council, New Mexico Mining Association, Mining and Metallurgical Society of America and the Mineral Information Institute.