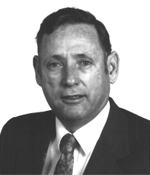 "For his outstanding accomplishments in the hydrometallurgy of refractory gold ores and innovative applications of mineral processing fundamentals to the practice of flocculation, dispersion and dewatering."

Bernard J. Scheiner is a Research Supervisor for the Fine Particle and Waste Technology Section, Tuscaloosa Research Center, US Bureau of Mines and has served in that position since 1979. Dr. Scheiner has been employed by the Bureau for 27 years; prior to going to Tuscaloosa he was at the Reno Research Center.

He has a BS and a PhD in chemistry from the University of Nevada, Reno in 1961 and 1969 respectively as well as additional course work in chemical engineering at the University of Nevada. He is the author of over 200 scientific publications, the editor of 5 books and holds 17 patents. His field of interest includes solid-liquid separation, hydrometallurgy and flotation fundamentals. As a member of the Bureau, he developed the chlorine oxidation technique used for carbonaceous gold ores in Nevada.

He is a Distinguished Member of AIME, Past Chairman of the American Filtration Society and First Regional Vice Chairman of the Executive Committee of MPD-SME. In addition to SME, Dr. Scheiner belongs to Sigma Xi and the American Filtration Society. He has been active in his professional and honorary societies and has been the recipient of numerous awards.