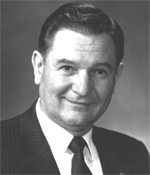 "In recognition of his outstanding contributions in computer modeling, simulation, process control. and design and economic analysis of mineral processing unit operations."

Andrew L. Mular is Head of the Department of Mining and Mineral Process Engineering at the University of British Columbia, Vancouver. He obtained his B.Sc. and M.Sc. in Metallurgical Engineering at the Montana School of Mines in 1958. In 1963. he became an Assistant Professor of Metallurgical Engineering at Queen's University, Kingston, where he was appointed Associate Professor in 1965 and Professor in 1971. He joined USC in 1972 as Professor of Mineral Process Engineering. In 1984, he received the Walter Gage Teaching Award from the Engineering Undergraduate Society at UBC. Professor Mular is author or co-author of more than 80 technical publications. He is coordinator and co-editor of a series of texts on plant design, published by the Society for Mining, Metallurgy and Exploration.

An active member of CIM and SME. Professor Mular has received two SME publication board awards and was a CIM Distinguished Lecturer in 1981 . He has served SME and CIM 1n numerous capacities and was Chairman of the Vancouver Branch of District 6 of CIM in 1982. He has served as an examiner for the Association of Professional Engineers of Ontario and British Columbia and 1s a member of the Board of Examiners for B. C.